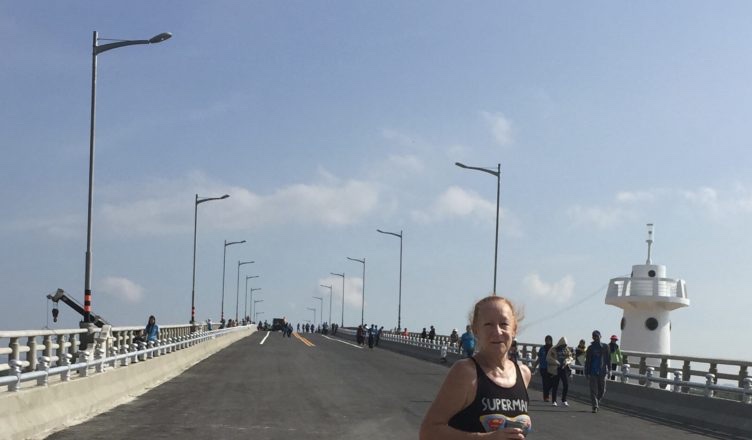 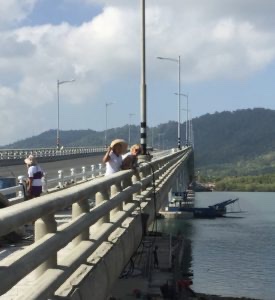 I remember way back, probably around 10 years ago, being told that they would build the Koh Lanta Bridge from Koh Lanta to the next island.  This didn’t mean much to me at the time as I’d been taking the passenger ferry between Phuket and Koh Lanta, where I’d been wintering each year.

On that trip, 10 years ago, we took a car from Koh Lanta to Phuket to catch our plane.  We didn’t want to take the ferry as that would give us a long boring wait at the airport until late into the night.  It was the first time I’d taken the small car ferry to Koh Lanta Noi and then another car ferry to the mainland.  There was this picture of a big beautiful bridge at the Koh Lanta ferry port.  No one seemed to know much about it other than it was going to happen ‘some day’.  The next year the picture was still there, but rather weather beaten
.  And the following year the picture was partly shredded from the wind and totally faded.  Then it was gone!

Low and behold, almost a decade later the bridge is built and the Grand Opening is tomorrow with a day of festivities planned by the local and provincial authorities. But I had to have my own bridge celebration.  What a better way to welcome this new addition to my island than a walk over it with good friends.  We set off early in the morning to try to escape some of the hot sun and the extremely high temperatures now o 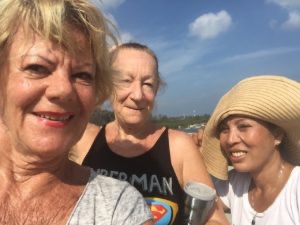 We parked at a the German Bakery, a super restaurant where we’d return for breakfast.  We se
t off down the road for the bridge.  It was just the 2 of us on our way as our other friends had found excuses to cop out!  However, when we go to the bridge, one friend did join us, which was super.   She was Thai and could help us with any ‘difficulties’ if the authorities didn’t want us on the bridge.

We walked right onto the bridge without any problems. There were others on the bridge, a clean-up crew and some vehicles with workmen putting the finishing touches on the structure.  Everyone was having fun, taking pictures and marvelling that finally we had a bridge.

Click this for a short video (46 second) I took from near the middle of the bridge.  The view from the bridge includes the beauty of Koh Lanta, the town of Saladan, the beach area of Koh Lanta Noi and the mangrove shoreline of both islands. 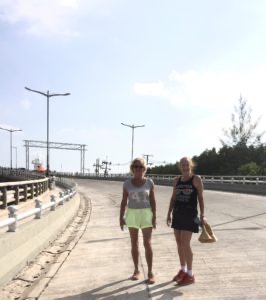 For those who haven’t been to Koh Lanta, this bridge will take 20 minutes to an hour plus off the travel time to Krabi City.  This is where we go for supplies and to an International Airport for flights to Bangkok and away….

All of us living on Koh Lanta have many stories of how we almost missed our flight, or had our kidney’s about to burst due to crazy ultra long wait times and ridiculously long queues for the ferry.  The ferry ride will be a thing of the past.  Yippee……

So that day, I did my own personal bridge celebration and we had a blast!  I took pictures the whole way over and back.  I think the bridge spans at least a kilometre.  It’s ultra-sleek and surprisingly well constructed for a bridge way off the beaten path.  It has 2 lanes each way:  one for cars and the other for motorbikes. 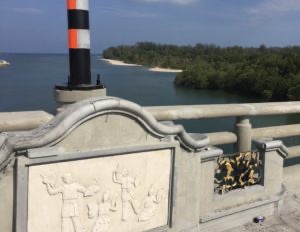 There is a nice big sidewalk on each side of the Koh Lanta Bridge.  There are really beautiful murals at each lamppost depicting a traditional Thai ‘sea’ scene.  We were amazed at the high quality craftsmanship of these murals.  Yes, we were very proud of our Bridge.  And also thankful that we are all living on the most amazing island on the planet.  We walked across the bridge with pride and enthusiasm.  We were all so glad we were doing our ‘celebration walk.’ 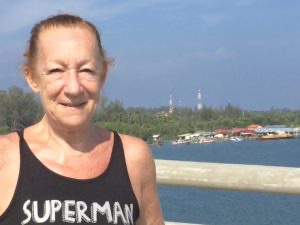 The Koh Lanta Bridge was solid.  None of us felt like the bridge would tumble down, crack or otherwise self-destruct.  We laughed at all the stories we’d heard.  More importantly w all enjoyed our time knowing that we’d never again get the opportunity to stroll down the middle of the bridge.  It would be the sidewalks for us if we wanted to walk it again after the opening.

We had fun walking the bridge.  We checked out the rails, the sides, the murals and the lights and gave it our seal of approval.  And of course we all took a ton of pictures.  Everyone should do such celebrations.  You can absolutely do your own thing prior to an event making it part of your life, your history and your memories.

It feels good to know that every time I cross the bridge I will remember the fun I had walking on it with 2 good friends before it was open.  Such wonderful memories we made that day…

3 thoughts on “Walking the Koh Lanta Bridge: History In the Making!”

Interesting and inspiring experiences you have got here on your blog. Thanks for being so brave and loving life through…