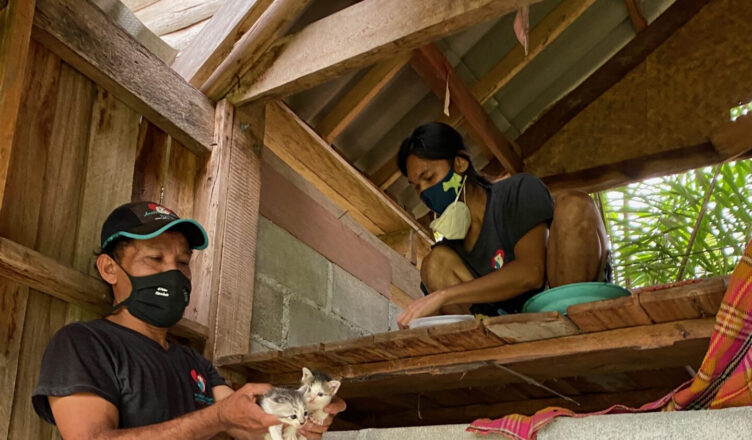 Feeling so good from helping a Mum and her newborns

Doing something for others is a great way to feel good, even if it’s something simple.  Sometimes it’s the simple things that have the most meaning. 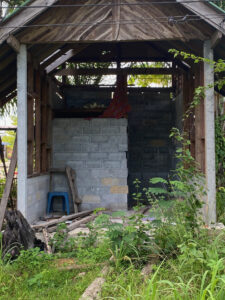 Every day before sunset I head down to my beach to feed about 18 cats that have dumped at the many locations in the abandoned resorts on the beach.  With COVID restrictions and the lack of tourists on Koh Lanta, so many people have had to leave the island.  With no tourists, there are no jobs, and without jobs there is no money.  They leave to find work to support themselves and their family.

My first feed station is in this half built bungalow.  The concrete block structure has windows, a roof, and a high ledge.  That’s about it.

I’ve been feeding the same two cats there for over a year.  The other day, after I’d fed them and left fresh water, I was on my way, when something made he look back. 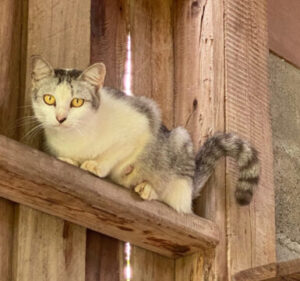 Maybe it was a noise, a rustling, or just the wind.  The two cats I fed were still gobbling down their dry food, so all was good.  I heard another sound and looked up. 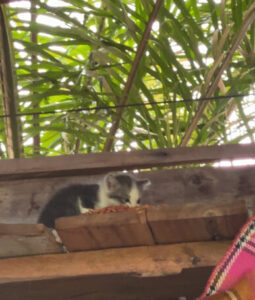 As my two cats may not welcome a third cat eatting out of their feeder, I thought I’d put a small container up on the ledge for this sweetie.  My plan was to give it food for the next few days, and see if it was getting on with the other cats.  If all was good and they got along, I’d just put more food out for them all.

I had an empty container in my bag, so I used the lid as the food dish.  I put a good handful of crunchy dry food in this lid, and carefully lifted it onto the ledge.  On my tip-toes, I could just slide it up.  Of course it took two tries, but I got it up there.  The sweetie immediately jumped up and started to eat.  She must have been starving.

All was good, so I continued on to my next cat feeding stop.  As I walked away I looked up to see if the cat was still eating.  To my surprise, I saw two cats eating.  The second cat, a tiny kitten, was at the edge of the ledge.  It had the same colouring as the sweetie, who I realized was its Mum. 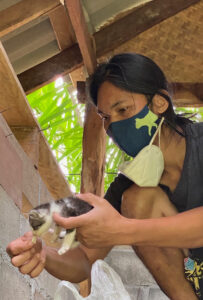 I figured that if there was one kitten, there had to be more up there.  Possibly the Mum got my attention to ask for help.  Maybe one of the kittens was sickly.  I called the experts.  Right then and there, I messaged the amazing Head Vet at Lanta Animal Rescue, the animal rescue charity here on Koh Lanta.

Fez, the animal rescue resource, found 3 kittens along with the Mum.  He had no problem climbing up on the high ledge.  He checked them all out and told me that they were still drinking their Mother’s milk.  This meant that he couldn’t take the Mom for sterilization yet as the kittens need this milk to survive.  Once the Mother is sterilized, her milk will dry up.

He told me he’d be back in 2 weeks to take the Mother and check on the kittens.  She’ll also get a full check-up along with the vaccine’s she needs.  Once the kittens are old enough, he’ll take them to the clinic for a checkup and to start them on their vaccines.

The Mum and her kittens will be fine

I’ll be feeding her every day and leaving her water, along with the other cats I feed on my daily route.  Once she’s sterilized, I’ll leave kitten food as well. I’ve devised a ‘step’ to stand on so I can reach the rafter ledge they live on.

So many cats have been dumped on the beaches and at abandoned resorts. It’s crazy walking through these resorts and on the amazing beaches here with no people. Like I’m ‘in’ the post-apocalyptic novels I read…