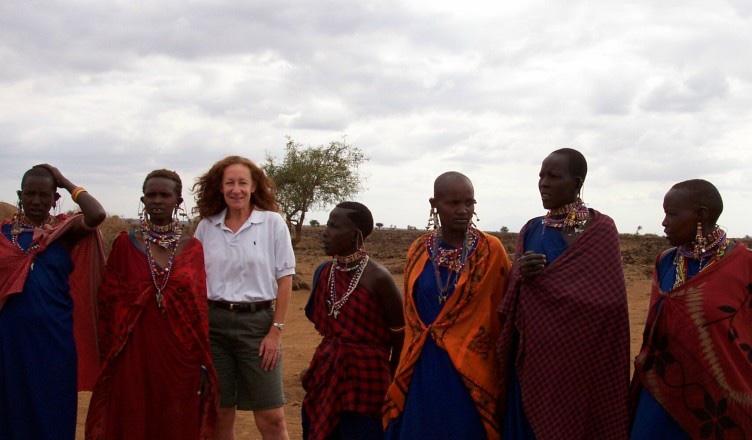 Single file they snaked towards me. Some were smiling, others were serious, and I was definitely nervous, in a curious sort of way. They formed a circle around me and started jumping, their feet landing silently with a cloud of dust rising around their ankles. The chanting started with one, then other, and soon they were all making a high-pitched noise, loud enough to rattle my eardrums.

I was at the foot of Mount Kilimanjaro, in Kenya’s Amboseli National Park, literally in the middle of a Masai Welcoming ceremony.   Chief Dave, who was standing with me just outside a Masai village, was waving his walking stick in the air to direct his people. The village consisted of a bunch of round mud huts, surrounded by a loose brush fence. There was nothing around for miles except the dry parched earth, a few sprawling acacia trees with the occasional giraffe or herd of wildebeests passing by.

“What are they doing? Why are they still jumping and how come they are screaming so loud?” I asked the Chief, yelling over the chanting.

“It’s our Welcome Ceremony and they’re having a jumping contest in your honour. We’ll let them jump for a while so they can pick the best jumpers, and then you’ll pick the winner,” explained the Chief in excellent English. “While they are busy, I want to tell you about me and my village.”

Over the next few minutes, as his people continued to jump and chant, Chief David told me his story.   Five years ago, after spending ten years in Nairobi with missionaries, he decided to return to his village. Even though he was only eighteen at the time, he was made Chief because of his education and experience away from the village. He set up a small school and taught his people basic spoken English and simple math. Then he tackled the problem of health care. In order to get money for doctors and medicine he contacted the Amboseli Park Safari Lodges and tour operators, offering them private visits to his village in exchange for small cash donations. He told me that my donation would be used that evening to buy medicine for his cousin, who was fighting both aids and malaria.

Above the chanting and the cheering, Chief David continued his speech, explaining the rituals of their hair and clothing. Throughout my visit he spoke almost constantly, always asking me if I understood and if I had any questions. He told me that they all braided their hair with beads but at twenty-five they cut their hair extremely short. They were all wearing bright coloured robes and all the men carried walking sticks. Orange robes meant that the person was married and red hair paste was worn for celebrations. Everyone was wearing lots of multi-coloured beaded necklaces, bracelets, belts and earrings. Most of the villagers, both men and women, were wearing at least ten earrings in each ear and some ears had holes the size of a large coin.

“After the ceremony, I’ll show you around my village, explain our customs and introduce you to my family, but first, you must select the best jumper.” said Chief David as he once again raised his walking stick in the air.

This signalled the highest jumpers to move towards me. They were both young men with long braided hair, and could they jump. It was like their feet had springs as they bounded up in the air the second their feet touched the ground.   The clink from the beads around their neck was the only sound from these bouncing jumpers, no shortness of breath, no huffing and no puffing.   I quickly pointed at one jumper, ending the contest and fortunately the chanting too. The winner stood in front of me with a huge smile on his face.

“You are a very high jumper and a good athlete,” I said, “I’m very pleased to meet you.”

With a nod from the Chief, the jumper took my hand and led me, along with the other villagers, through the brush fence. Once inside the village everyone crowed around and began to inspect me. They touched my skin, rubbed my watch and gently pulled on my clothes. They were all smiling and laughing, amusing themselves with me, like a prize at a party. Some were friendlier than others and started playing with my face, pushing and pulling my cheeks and nose, prompting others to measure their hands and feet against mine. I wasn’t afraid; I knew they were curious about me as I was physically so different from them with my pale skin, long hair and drab coloured clothing. I began to express my own curiosity by inspecting their hair, jewellery and their ears. Their skin was soft and smooth, and surprisingly dry, even after having jumped so vigorously.

Their ears were fascinating, with many earring in very large ear holes. The Chief told me that made the holes with a small twig carved to a point at one end. They first use this to pierce the ear and then over time the twig is pushed, a bit more every few weeks, to stretch the hole. The twig is changed for a larger one and the process continues until the desired size hole is achieved.   One of the women was eager to demonstrate this process, but when I found out she wanted to use my ear, there was much laughter as I declined the honour.

The villagers could speak a bit of English and they were eager to use it. As I made eye contact with a villager, they would say hello, and either reach out to touch me, or ask me a question about my person. Why is your hair red? Why do you wear white? Why are your eyes the colour of the sky? Why do you play with that small shinny box?   The questions were never-ending.

A man told me that they liked shiny things as he tapped on my watch and my camera. I started to show them the pictures I’d taken on my camera’s tiny digital screen. My shinny box was a hit, and I asked the Chief if he would take my picture. After much coaxing, the Chief said he’d love to. I gave him a short lesson and let him take a few pictures of me with his people.   (Chief David took all the picture of me that accompanies this article.)

To keep my visit on schedule, Chief David shouted out orders and amongst much laughter the women moved away. I was led to a big log and told to sit. Four young men, I assumed young as they had long hair, started to fiddle with some twigs showing me how they made a fire. David showed me some roots and leaves as he told me about the natural medicine teas they brewed from the roots as well as from insects, to treat sicknesses such as malaria and aids.

I was led me on a walk around the village that consisted of ten mud-dung huts laid out in a circle. There was no water, no electricity, and no communications of any kind. The village was completely isolated from the outside world unless it was by foot through the brush fence. I assumed that the toilet was anywhere out on the plains outside the village, and that the water was brought from one of the lakes or rivers.

Chief David led into one of their round mud huts. I had to crouch down on the dry ground and crawl into the dark brown structure that had a foul smell of damp earth and rot. It was extremely claustrophobic with only two of us in the hut and I only lasted a few moments before I had to get out and breathe some fresh air. Inside the thick walls of the hut there was no furniture, just a flat area where the family slept.

After giving me a few moments to catch my breath, my walk continued through to the backside of the village to see a small brush fence enclosure outside the village fence. This is where they kept the village animals; a few goats and a couple of skinny cows.   The brush fences around the village and the animals were for protection against the wild animals at night. Being in the village I had almost forgotten that Ambroseli National Park is full of zebras, giraffes, wildebeests, and elephants, as well as many varieties of wild cats. David told me that the middle aged and older men led the animals to the watering holes during the day, returning at sundown with water and food. I could hear the singsong of the children as we strolled around the village and David pointed out the school, which was just outside the village under a sprawling acacia tree.

I saw dust clouds in the distance from the approach of another safari vehicle and realized that my visit was almost over. David led me back to the front of the village where his people were gathered together chanting what David called the Safe Travel prayer.

“Thank you for honouring my village. We all wish you a safe journey home”, David said as he escorted my out of the village towards my safari vehicle.

“Is there anything I can do for you when I return to Canada?” I asked the Chief as I turned to wave good-bye to his people.

“Well, madam,” he said with a great big smile, “I’d love a shinny watch or a magic box, to share with my people, of course.”

As we drove away I watched him raise his walking stick high in the air bidding me a regal farewell. As he got smaller and smaller out the back window, I wondered if he knew how lucky and honoured I felt to have shared a few hours with him and his people.

The Happy Cat - Are you doing something different and loving it?

Yes, that is a very good way to describe it, and here on Koh Lanta, it is popular, especially in…

BR - Are you doing something different and loving it?

Way to go, Happy Cat. Repurposing is a way of life.

Hi Portia - I do apologize for not replying sooner, or making sure when I reply it actually gets posted.…