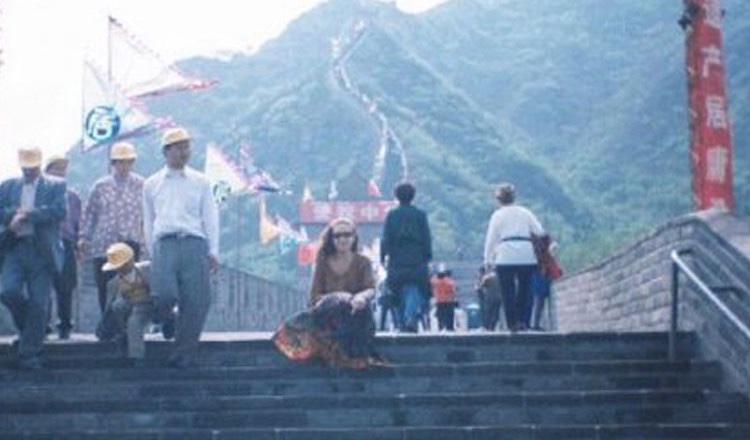 The Great Wall of China, with its steep rock stairway winding up into the clouds, is breathtaking. I was at the Badaling Section of the Great Wall, about sixty miles north of Beijing. My friends had left me at a lookout near the Visitor’s Entrance while they climbed up to the Guard Tower at the top of the first mountain. I was to wait there for their descent. Just looking up the steep steps brought shivers through my body and I knew this was not the place to challenge my height phobia. Feathery clouds floated in the clear blue sky and the temperature was slightly cool, a perfect morning for their strenuous climb. Being a Tuesday, there few visitors so I could enjoy some solitude with the amazing view of the Wall as it snaked up the mountains and through the countryside.

I didn’t notice them at first. I was watching my friends’ antics as they climbed the almost vertical sections using all fours. It was when my friends stopped climbing and moved aside that I first saw the swarm of dark brown that was quickly descending the steps. There must have been at least thirty of them following a woman holding a small flag high in the air. As they got closer I recognised the round Asian faces, black eyes and stocky bodies; they were Mongolians.

Many of them were pointing down the stairs and I wondered what was attracting their attention. As they were coming down quite quickly I assumed they were anxious to get to the base buildings where they could get drinks and snacks, or maybe they were late for their next destination. The Chinese take their vacations very seriously and enjoy a whirlwind schedule visiting as many locations as possible each day.

As they were getting closer their voices were getting louder and louder, so I looked down towards the base to see if anything was happening. Below us everything looked calm and without incident. I shifted my gaze back up the Wall and was surprised to see that the group was getting more and more agitated. Many of them were now in front of their guide, yelling louder and still pointing in my direction.

I was starting to get worried. What did they see that caused them so much excitement? I was standing on a lookout jutting out from the steps with no place to go to get out of their way. The excitement of these people was infectious, as now nearly all of them were shouting and pointing.

I began to think about where they were from and how they must felt about being on the Wall. Did they have a sense of pride and history at this amazing place visible from space?   I quickly returned to the present, they were getting closer. It was absurd but I realised that they were pointing at me, there was nothing else around.   I would have scrambled down to the Visitor’s Entrance but I didn’t want to miss my friends. I moved up against the lookout wall and grabbed the guide-rail for support. My heart was pounding and moisture was forming on my face and neck.

I didn’t know what to do as they rushed towards me, then everyone became very quiet and stood quite still. Their guide pushed through to the front of the crowd. With a big smile on her face she said, “Hello. We Mongolian. Excuse please. We touch, yes?”

I could hear their rapid breathing and feel their hopeful anticipation from the way they had their eyes open wide with their mouths agape. Many even had fingers raised in readiness. They truly wanted to touch me. There were so many of them, I didn’t know what to do or how to respond. Before I could say anything one of the older women put her arms around me in a big bear hug. The others stepped back in shock as their guide pried her off me.

With a big smile I practised my Mandarin and told them I was a friend and a wanted to share some tea. Kind of corny, but I knew that it was a polite thing to say. I realized that I had nothing to worry about, they were just curious. I wanted to encourage them to touch me, even though their guide had tried to stop this. I held out my arms towards them and to my delight their faces transformed into wonderful big smiles. The older woman came back up to me and started poking my arm, and others followed her. While they touched me they were giggling and talking amongst themselves. I think they were amazed that I felt normal, just like them.

After much laughter, a woman held up her camera. I reached out to take it thinking she wanted me to take her picture, but she pulled it back and a man put his arm around me. I understood that she wanted my picture, so I nodded and smiled. The man planted a big kiss on my cheek as the woman snapped the picture.   Then two older women came up to me.   They both kissed my face as an older man took our picture. Things continued on this way until every member of the group had a picture with me.   While most only kissed and hugged me, some also pulled on my arms, one man tried to pick me up, and many of the women pulled and played with my long hair.

When my friends returned from their climb I tried to explain what had happened. They thought I was making up something so they wouldn’t feel bad about leaving me alone when they went up the wall. It wasn’t until we were in the parking lot leaving that they finally realized I wasn’t making up my story. The group of Mongolians were boarding their bus. When they saw me they all began to wave and cheer in our direction.

The Happy Cat - Are you doing something different and loving it?

Yes, that is a very good way to describe it, and here on Koh Lanta, it is popular, especially in…

BR - Are you doing something different and loving it?

Way to go, Happy Cat. Repurposing is a way of life.

Hi Portia - I do apologize for not replying sooner, or making sure when I reply it actually gets posted.…