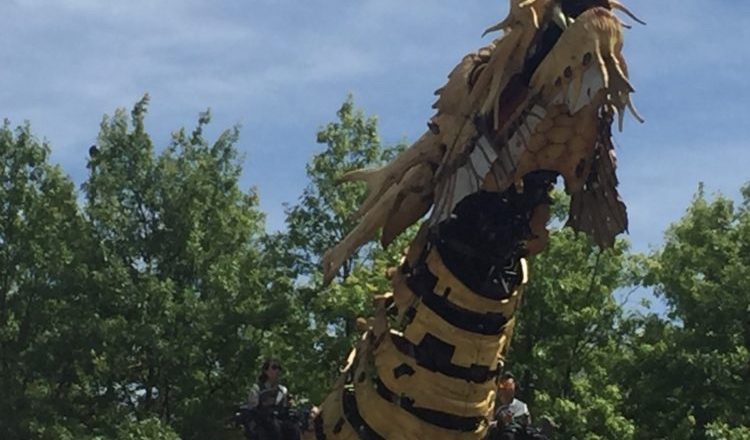 Biking is the Best Way To Explore a City

I love biking!  Not only does it keep me fit, but it provides endless opportunities to explore Ottawa.  Imagine my surprise at finding mechanical animals chasing each other on downtown streets.  This was my first time biking since returning from Thailand late-July.  The crowds were unbelievable; masses of people as far as the eye could see.   Even though it was a few weeks after Canada’s 150th Birthday, the city was still bursting with tourists in celebration mode.

There was this huge dragon and a monster spider that were apparently having a major disagreement and were basically stalking and chasing each other.  This was even broadcast on the 6 and 10 pm local TV news channels.  Both animals were mechanical, driven by a team of technicians.  We could see them on their undersides, maneuvering these shift-like control sticks.  And each ‘animal’ had it’s own live music band on a perch hanging from a crane, following behind the animals.  Best of all, I came across these animals when I was biking on two consecutive days.

Here are a few links to mini-videos I took of these crazy machines:

Don’t Forget to Look Up 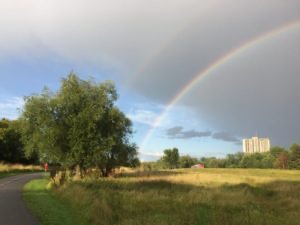 Of course I’ve been caught biking in the rain many times and gotten totally soaked just as many times.  Usually when I leave home the sky is blue and almost cloudless.  However, many days it seems that by the time I’m 30 km out there, the rain begins.  And it isn’t usually a drizzle!  It’s a pounding, fierce 20 minute downpour, and this idiot (as in me) keeps going.

On one wet ride, something made me stop and look back.  The most amazing rainbow was arching across the sky.  I watched it for a few minutes and then it was gone.  No idea why I stopped, but I’m sure glad I did.  It was like the sky was trying to apologize for getting me so wet.

Surprise Yourself with a New Route 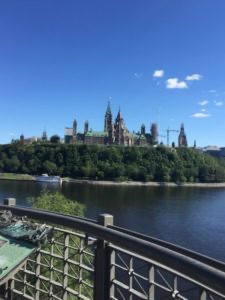 I’ve been doing the same 45 km route for ever.  It takes me downtown and around the famous Rideau Canal. This is the 6 km skating rink that Ottawa is famous for during the winter months when the canal is frozen.  This summer there is a lot of construction downtown, and there are detours on the bike path.  Instead of following the signs for the detour, I decided to break out of my rut and head over a bridge into Quebec.  No, I didn’t need a passport?  (inside joke)

Ottawa is in the Province of Ontario, but on the Province of Quebec border.  There are many bridges across the Ottawa River that runs between the two provinces.  I figured I could add a few km to my route by crossing one bridge into Quebec, and then another back to Ontario.  This second bridge provides amazing views of Parliament Hill.  The bridge even has a pedestrian/bike path section to encourage exercise.  How good it that?

Oh ya, Ottawa is an amazing people oriented city.  There are pathways everywhere, and bike lanes on most busy streets.    This deviation to my route has now become my route, and I’m loving the change.

Opportunities to Check out Stuff

Biking in the city gives me a chance to check out things that I never get around to doing when I’m in my car.  It just feels like too much effort and bother to find a parking spot, and walk to a shop to check out their new display, read the menu in the window of a new restaurant, s 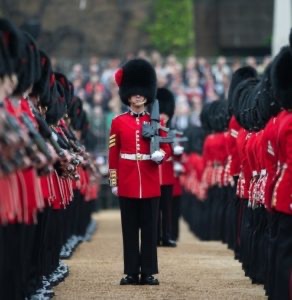 ee the progress on a construction site, or look for a maple syrup stand in the market.  But on my bike, checking stuff out gives me direction and purpose.  Not to mention a bit of a break in the middle of a long ride.  For sure I’ll go a few blocks off my route to check something out, and I’m loving it.

Yesterday I checked if a new parking lot had opened cause I want to use when I’m downtown next week.  I also came across and watched a marching practice for those wonderful Queen’s Guards with the big hats.  You know the ones, they won’t look at you or have any facial expressions no matter how many antics you try to get their attention.  Ya, like the ones at Buckingham Palace.  Or I should say the same ones, as the Queen gave them to us to guard Parliament Hill.  See the photo, I didn’t take it, I just want to show you what I’m talking about.

Check Out Your City!

How often do you check out your city?  It may seem boring but give it a try.  You never know what surprises you’ll find.