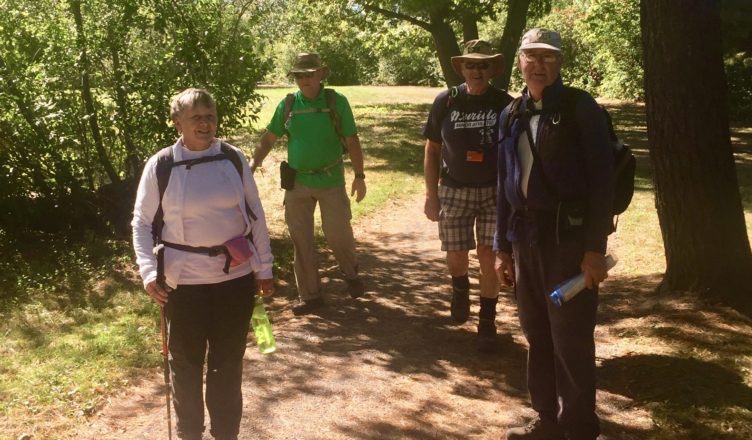 The Kingston 4:  Walking 250+ KM from Kingston to Ottawa

The Kingston 4, the name I coined, were walking from Kingston to Ottawa, a distance of 250+ km.  While they were not walking this continuously in one go, it is still a major undertaking.  Their approach was to put in a few good walking hours each day until they reached their goal.  The trip takes about a 2.5 hours by car on an average day.  They were all happy, positive and thoroughly enjoying themselves.

I was out for my Sunday long run and saw them about 3 kilometers out.  As I approached this group I definitely felt there was a story there.  It isn’t often that I see 4 people walking with such purpose, they looked like they were on a mission.  They had backpacks, big bottles of water, and 2 had walking sticks.  When I caught up with them I slowed down and asked how far they were going.  They were all so upbeat, I could see they were having a fun ti

me.  One of them told me they were walking to Parliament Hill from Kingston.  The look of astonishment on my face prompted another to say, ‘But not all today’, with a big smile and chuckles from the others.

I just had to stop running and walk with them hear their story.  They were walking from Kingston to Ottawa, over a number of days.  One told me that the following day they would reach Parliament Hill, their final destination.  I wish them all the best and returned to my run.

As I approached my half-way turnaround point, I thought, ‘stupid me’, I should have taken a photo so I could honor them with a story on my blog.  I calculated my distance and pace, and figured I’d find them on my return as they approached their stop point for the day.

My calculations were right on 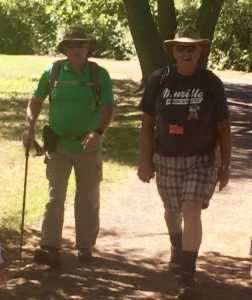 I did find them.  After 20 plus years as a distance runner, I know my pace and am good at figuring out when I’ll be somewhere.  However, I did have to back track a bit as the Ottawa River Parkway Path splits at a few points.  But I found them.  They probably thought I was a crazy runner, and I guess they are right.  I told them I wanted to do a story about them on my blog, and asked if I could take their photo.

I took a bunch of photos and told them that they were finishing on my birthday, my 64th birthday.  They all said, “We’re all over 60” with big proud smiles.  To them, age was just a number, not a determinant for life!

I hope they read this.  As I was on my way I told them to check out ‘thehappycat.ca’.  Hey Kingston 4, if you are readying this, I hope your last day was terrific.

We can all learn from the Kingston 4 that we are never too old to do something fun and interesting.  Our lives can be so much better if we go out there and do stuff.  Think of a ‘project’ and start to plan.  Find others to do it with you.  Use community groups, social media and word of mouth to spread your story.  You will find people to join you.  And if you don’t, do it yourself.

I ran 18 kilometers yesterday, and today I’m 64!  That’s chai, the symbol for luck.  As in l’chaim, the toast to life and good health.  An appropriate distance to celebrate my birthday.  I may be crazy, but I’m not old!

Don’t ever pull the age card,  just do it!

Interesting and inspiring experiences you have got here on your blog. Thanks for being so brave and loving life through…