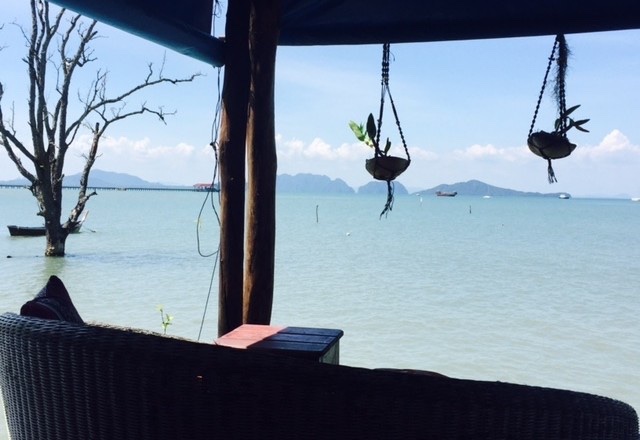 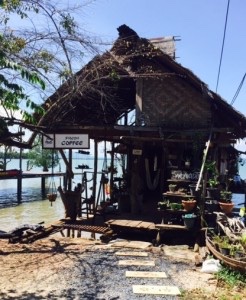 ‘What a kooky looking place!”, was my first reaction when I saw Sandy @ Old Town, a small restaurant on the south eastern side of Koh Lanta.

I was totally excited to go into this crazy building on stilts in the Andaman Sea.  You walk through the ultra clean kitchen to the dining room over the water and you stop.  Everyone stops – the view is spectacular!

It does take a few moments to ‘come down’ from the thrill of the view, and then you have to pick a table, which isn’t easy.  You see, you have to pick a view, and the view from any angle in the restaurant is wonderful.  You can even sit in a round daybed lazing away the afternoon as you gaze at the outlying islands and at the occasional fishing boats as they go by.   The dining area is open on three sides to the sea with lots of hanging plants in coconut shells which add to the relaxing character of the restaurant.  It sure brings back the era of Woodstock, the Doors, Simon and Garfunkel, Leonard Cohen and laid back days spent with good friends not doing much, but accomplishing a lot!

While the outside of the building is quite dilapidated, the inside is clean, modern and very sturdy.  I have to always remind myself that when in Thailand, things don’t always appear as they really are.  This can be good or bad, depending in the situation.  In this case, it is extremely good, as I wouldn’t have wanted to end up in the Andaman Sea!  For sure people would chatter that we had a liquid lunch!

And speaking of character, Sandy is a unique ch 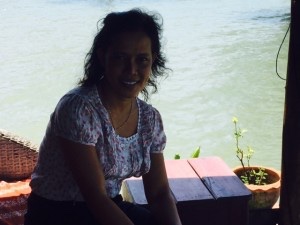 aracter herself.  She’s as beautiful as the view, with such warmth and a friendly personality you almost think you’ve know her for a long time.  She didn’t rush me to order but was so helpful describing the special frozen ‘power’ juices they offer and letting me figure out which one I wanted.

The Food Was Delicious 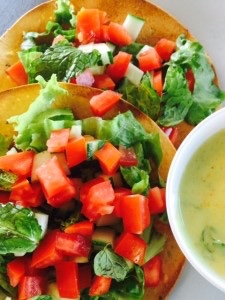 The menu included a handful of items that were made fresh from natural ingredients.  I was in the mood for something light, so Sandi suggested the Namaste Salad as it was light and easy.  This unique salad is like  bruschetta but instead o baguette ices, flour chips are piled with the salad mix.  The cilantro added in with the tomatoes was so tasty and delicious, as was the dipping sauce that was made with maybe a dash of cumin and some mint with yogurt.  I’m not really sure what was in the sauce, but it sure was delicious!

My friend had spring rolls and a northern Thai noodle dish called Khao Soi that he said was wonderfully hot and tasty.  He tells me that this was better here than what he’s had in Chang Mai, which is crazy, as we’re in this kooky house in the middle of ‘way out there’ on stilts in the water!  He also had a coffee and said it was as good, if not better, than the coffee at many multi-star resorts.

With a lazy lunch in a kooky restaurant on stilts in the Andaman Sea comes interesting conversation.  The beginnings of this restaurant is an interesting little story.

Nat, from France, who is studying Thai for a few years on the island, rented the house.  It was very small with only a few rooms and it needed an awful lot of work.  Just look at the picture of the outside; the inside was just as dilapidated!  Nat decided to add a big room onto the back, extending the house out into the Andaman for her sitting room.  The bedroom was in a closet size room at the front of the house.  Once the extension in the back was complete and Nat had fallen in love with the view, she decided to build a second floor on top of the extension, for her bedroom.

About that time Sandy was looking for a new location for her restaurant.  Nat used to visit Sandy’s small restaurant to practice her Thai, which I must say is pretty terrific considering she’s only been at it a year.  As Nat’s Thai improved, her and Sandy had became very good friends.  It isn’t that Sandy only speaks Thai, her english is excellent, it’s that Nat, a super character herself, was so intent on becoming fluent in Thai she gained the respect of the Thais in Old Town from her language efforts.

When the second floor bedroom was complete Nat had an open house for all her friends, and of course Sandy was there.  Maybe it was the wine, maybe the beer, or maybe the amazing sunset that night, but a few days later the 2 women had stuck up a deal.  Sandy would move her restaurant to the first floor of Nat’s house, and Nat would move upstairs.

And now we can all enjoy Nat’s amazing view of the outlying islands, as we savoury Sandy’s delicious food.

One thought on “Delicious Lunch at Sandy @ Old Town, a Charming Restaurant on Koh Lanta”