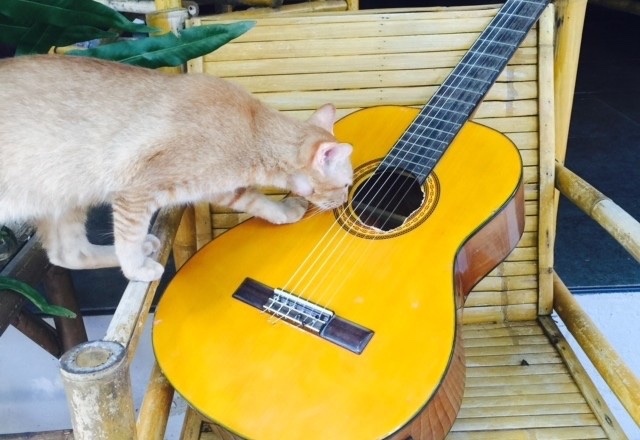 It’s Exciting to Learn Something New

It had nothing to do with my age, my learning ability or my memory.  And I really did want to learn something new.  But I’m a computer geek, that’s why it didn’t work out!

Here on Koh Lanta there is a local expat from England who is a retired music professor.  He tells me he’s taught guitar for more than 20 years and has had great success with his students.  I told him that I’ve always wanted to learn to play and he told me that I’ve asked the right person.  He agreed to teach me guitar in exchange for 3 beer.  I think the beer is to go along with dinner once every few weeks.  You see my partner is a BBQ Master and my professor was hoping for a rib feast, steak night and a Sunday roast dinner.  Home cooking western style isn’t really available on Koh Lanta.  Most of the expats eat out all the time as it’ so cheap and easy.  There are western food places here but not really offering home-style cooking, something expats seem to miss an awful lot.

I’ve always wanted to learn guitar, violin or viola, but my high school didn’t have any string instruments.  I tried the clarinet with the hope of moving to the Sax once I got the hang of it.  The saxophone is a whole lot cooler than a clarinet, but my mouth shape was wrong for blowing through a reed.  I endedup learning the French Horn.  A tad disappointing but I did make it to the School Band.  However that kind of band is very different from a folk band.  I wanted to be in Peter, Paul and Mary, or Simon and Garfunkel.  Maybe be another Joni Mitchell or even a female Neil Young!

It’s never too late also I jumped on the chance to finally learn how to play the guitar.

We arranged that I would use one of his guitars until I’d had a few lessons so I would know more about what I liked in a guitar.  I could then travel to a nearby city on the mainland to get my own instrument.  The prospect of a road trip is alway fun and I quickly made plans with a friends to join me.  Even though I live in paradise, it is good to have some doses of civilization every so often.

First lesson went well.  I learned the parts of the guitar, and how to hold it.  This was rather difficult as I’m tall and didn’t know what to do with my legs and arms.  It was very awkward but I forged on.  I learned a few picking techniques combined with rhythms and strums.  I even learned 3 chords.  We put it all together into a practice routine for me to do every day so I’d get comfortable holding and playing the guitar.  I was very excited about my progress after the first lesson.  I felt I’d learned an awful lot and it was fun learning something new, even at my age.

The next day my practice went well.  I even started to feel comfortable with my sitting position, and the sequence of the rythms and strums.  Not all notes were clear but I was getting better.  The chord finger positions were difficult but I’m an avid crocheter with flexible fingers, it was just a matter of getting used to where to put the fingers and the pressure to apply on the strings.

The practice the second day went better than the day before.  The notes were clearer and my comfort holding the guitar was improving.  I could even remember the rhythm sequences and was enjoying them so much I was humming along to the melody.

But the third practice wasn’t very good.  I was having trouble getting comfortable holding the guitar and my strumming hand just wasn’t picking the strings they way I wanted it to.  Needless to say I didn’t practice very long and thought it was just one of those days.

That evening my right hand was tingling, like it was about to fall asleep.  The feeling came and went a few times and I figured it was cause I’d been texting a lot that day and my hand had been raised too much.  However the next morning I had the same tingling and a bit of numbness in my wrist which was cause for concern.

Of course my first thought was that it was a heart attack or stroke warning.  I know that sounds a bit extreme but I am over 60 and that’s a big risk I have.  Since I had no other symptoms and felt just fine, I ruled this out.  Not to mention that I’d done my cardio workout earlier and I was feeling super.  When I got on my pc to work on a blog I realized  what was going on; it was my carpal tunnel acting up.   This is the problem many of us computer geeks get in our right (mouse hand) wrist as we spend way to much time  on a computer.  Except now I use a wrist support and nothing had changed with my keyboard habits, so my computer use wasn’t causing the resurgence of my carpal tunnel problem.

My goodness, being concerned that carpal tunnel gets worse with mouse use and keyboarding is one thing, but I had never considered that non-computer things, like playing the guitar, could set it off!  Who was I kidding, the pinched wrist nerve can be aggravated by any repeated wrist or hand movement, especially if one has a history of carpal tunnel syndrome.

My guitar days were over!

When I thought about this I realized that it wasn’t that bad.  Even though I do try to see the positive in everything, there was absolutely positive without any stretching or fabrication of the situation.  The reality is that I got to play the guitar, I did learn something new.  I learned how to play 2 ways, by picking strings and by strumming.  I learned a few chords and I got to play a bunch of exercise sequences.  It was a whole lot more on the guitar than I’d ever had before in my life.  There’s that saying that it’s better to have loved and lost, then to never have loved at all.  This totally fits my guitar experience.

The other good thing is that my stopping guitar had nothing to do with my age.  I easily learned the cords, the techniques and the sequences.  My ability and desire to learn and grow is still intact – as a matter of fact I’m considering learning….

The moral of my little story is that I didn’t let fear of failure nor my age stop me from trying something I’d always wanted to try.